“Why Sports Matter” with Kevin Merida of ESPN’s ‘The Undefeated’

Kevin Merida answered questions over lunch with students about launching the new platform The Undefeated, the role of the sports fan, the purpose of a Black sports platform, and what makes a good journalist hire. When it comes to scoring a job, “find a way to stand out,” Merida advised.

Merida is a senior VP at ESPN and editor-in-chief of The Undefeated, a sports and pop culture website owned and operated by ESPN. Launched in May of 2016, the site is “the premier platform for exploring the intersections of race, sports and culture.” When asked about how The Undefeated approaches politics, Merida noted that The Undefeated doesn’t consider electoral politics within its scope, even if sometimes they cover aspects of political life.

He further explained that politicians do “come into our lane when they bring sports into it.” For example, “the President disinvites the Philadelphia Eagles and now it’s become a big question what used to just be an automatic thing. Teams go the White House. Every sport team goes to the White House. You win a championship, it’s part of honoring sports and teamwork, and achievement.”

Turning to athletes use of social and personal platforms for political expression, Merida said that “Athletes are really not going to just stand and just say ‘I’m here, and that’s it’.” “They really feel like they want to express themselves in ways that, I won’t say was not ever done before, but I think it’s much easier to do now.” Students from across disciplines attended, and asked questions regarding athletes, sports, and politics. Professor Philip Bennett moderated the conversation.

View our gallery below for photos from the event. 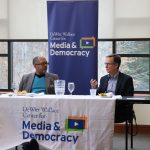 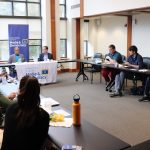 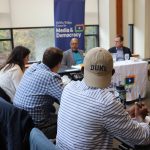 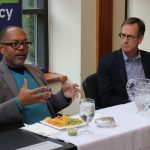 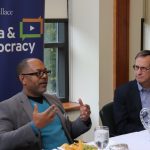 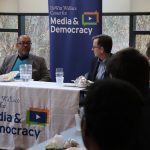