Kim Severson and Frank Bruni, two of the leading lights of the New York Times’s food section over recent decades, will discuss the changing nature of food journalism, the challenges of sustainability and cultural appropriation, and, beyond all of that, what it’s like to eat for a living!

You can join us in person or virtually.

Please click here to register to join us on zoom. 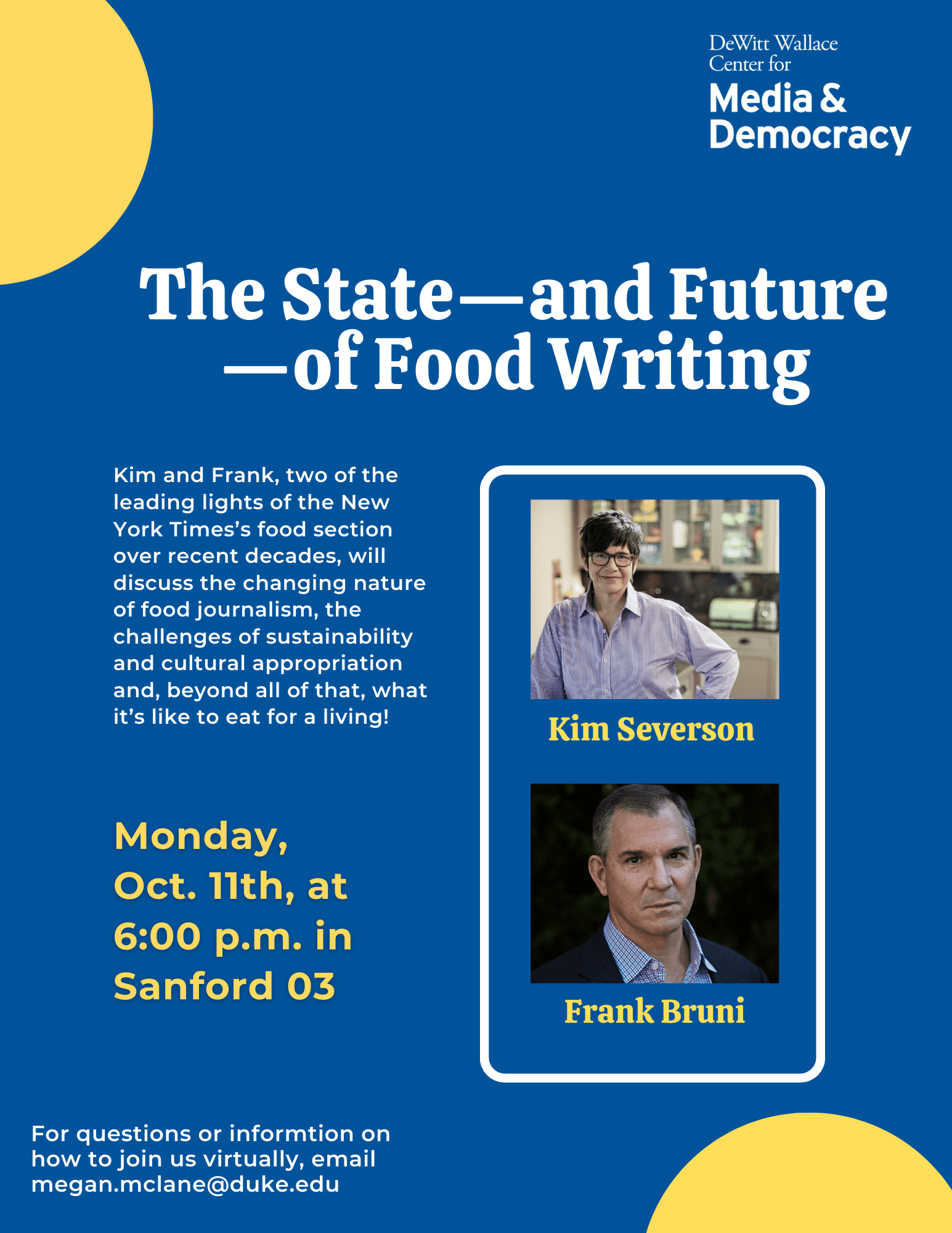 Kim Severson is a Southern-based correspondent who covers the nation’s food culture. She reports on food news, contributes to NYT Cooking, and was part of a team that won a Pulitzer Prize in 2018 for public service for reporting on workplace sexual harassment issues.

Ms. Severson has been on staff since 2004 and served as The Times’s Southern bureau chief, where she covered a mix of breaking and political news.

Before she joined The Times, Kim spent six years writing about food and culture for The San Francisco Chronicle and had a seven-year run as a news and features editor and reporter at The Anchorage Daily News in Alaska.

Ms. Severson has won several regional and national awards for news and feature writing, including four James Beard awards, and has written four books. Her memoir, “Spoon Fed,” was published in 2010. “Cookfight,” a cookbook written with fellow Times food writer Julia Moskin was published in 2012.

Frank Bruni joined the Duke faculty in 2021 after 25 years at the New York Times, where he served as a metro reporter, White House correspondent, Rome bureau chief, chief restaurant critic, and most recently as an Op-Ed columnist. He was the first openly gay Op-Ed columnist at the Times and in 2016 was honored by the National Lesbian and Gay Journalists Association with the Randy Shilts Award for his lifetime contribution to LGBTQ equality.

He is the author of three New York Times bestsellers: a 2015 examination of the college admissions frenzy, “Where You Go Is Not Who You’ll Be”; a 2009 memoir, “Born Round,” about the joys and torments of his eating life; and a 2002 chronicle of George W. Bush’s initial presidential campaign, “Ambling into History.” His first cookbook, “A Meatloaf in Every Oven,” was published in February 2017 and co-written with his Times colleague Jennifer Steinhauer. His forthcoming book, “The Beauty of Dusk: On Vision Lost and Found,” which reflects on his imperiled eyesight and the challenges of aging, will be published in March 2022.

Bruni remains a contributing opinion writer for The Times, which distributes his popular weekly newsletter every Thursday.